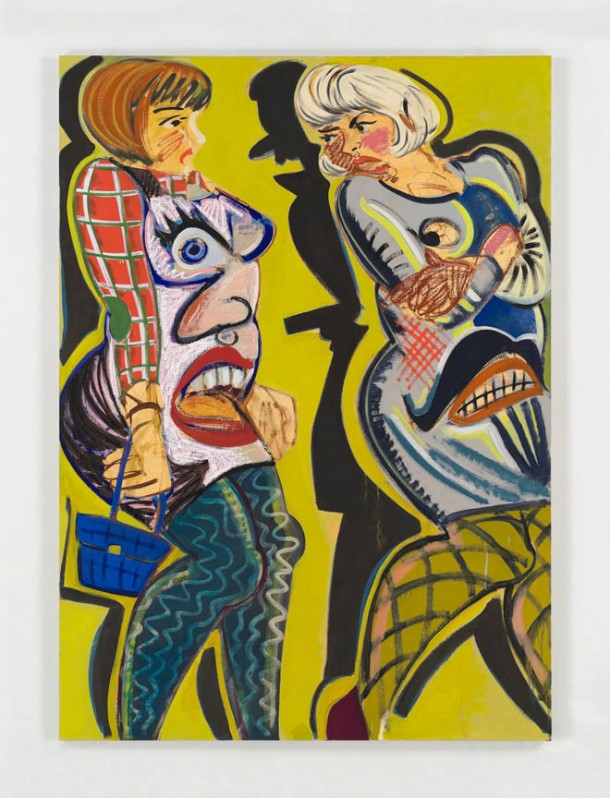 On the Verge of a Nervous Breakdown

“I am sick of being good,” whispers Pepa, the main character on Pedro Almodóvar’s Women on the Verge of a Nervous Breakdown (1988), while she throws a whole package of sleeping pills into her gazpacho. The hot colour palette, dominated by the red of the uniquely Spanish dish, accentuates the fast-paced events of the scene. Pepa is a professional and successful thirty-something woman who lives in a stunning – and kitsch – penthouse in the centre of Madrid. Her lover, Ivan, is a one-dimensional, almost cartoonish character that constantly cheats on her with the most absurd types: his first wife, an old lady who still dresses like a sixties baby doll, and his current lover, a feminist lawyer. The three women spend the whole film shooting each other furious looks – always in their impeccable and colourful clothes – and treating their male counterparts with utter contempt.

The second period of Almodóvar films (from the eighties) corresponds to a very specific period in the history of Spain. His films from this period leave behind the manifestations of revolt and celebration of the earlier years, but still mirror the schizophrenia that characterised a country that did not yet know what democracy meant. A period in which the dictatorial infrastructures were still very present, and Catholicism and its traditions had to live together with new values and representations, especially in big cities like Madrid. Almodóvar’s characters have an indefatigable and incorrigible energy and power. His women scream and talk about sex all the time, not in the way pseudo-feminist consumer culture is doing now – which does nothing but reinforce gender stereotypes – but by being really sincere and shameless.

From the moment I first encountered Criminal Stickup in Yellow (2012) I could feel the same strength and joy, passion and vitality that characterised the vibe from that period. It is the same energy that characterises one of the best films from the Spanish director. Ella Kruglyanskaya’s work depicts a close-up of two feminine figures that seem to be caught in the middle of an argument. What they could argue about is not really important; it just depicts a moment of emotional outburst.

The figures are an amalgam of female archetypes, from a Paleolithic fertility goddess to a 1950s pinup girl, heightened by a skillful brushwork and an intensely coloured palette. The set is deliberately artificial (yellow) and human emotions are treated in an abstract, almost synthetic manner. The two women are beautiful, a beauty that relates again to Almodovar’s female figures, even if they have cubist faces like his fetish actress Rossi de Palma, or even if they could be considered too fat by certain standards, or older than the teenage pop stars of today. Those two curved and exuberant women are very far from what is depicted in fashionable advertising, and yet they create exquisite shapes reminiscent of the most important figures of the history of painting. Take, for example, a different series of works from the artist, such as Reading Bather or Moustache Beach (2013), in which the feminine figure is laying down reading in a summery setting. They are depicted in a similar pose to that of the traditional odalisque, but they sit with their swimming costumes not interested at all in the male’s eye. Making a wink to one of the most traditional genres, Krugyanskaya’s bathers do not sit at any harem nor are an object of desire; they are empowered with their own bodies and their own colourful costumes.

A pair is the perfect formula to create dramatic tension. We are in front of two women but also of two different conflicting parts of the self, reinforced by the two faces pictured in the dresses. They look at each other: same hair, same size, same type of dress, somehow representing two sides of the same person, two juxtaposed expressions that are against each other’s personality. The scared and shy faces the outgoing and loud. There is something that vaguely refers to the masks of the Comedia dell’arte. They usually represent social types, each character embodying a mood: mockery, sadness, gaiety or confusion, with an aesthetic of exaggeration, distortion and anti-humanism. We tend to see the body as vulnerable: war photography marks the body as victim; pornography depicts it as merely usable. Perhaps, in opposition to this, Kruglyanskaya has sought to imbue her figures with monumentality. Equally, their voluptuous bodies are somehow too big for them, as are their hands, which stand like expressionist strokes.

Related to its frantic expression, what is also consistent about this painting is its humour. The scene depicted could have a crazy development, or could not; it is not important. But it is sure that it will have some comical nuance. A parallel could be drawn with the absurdities of zany Hollywood screwball comedies of the 1930s and 1940s, such as Howard Hawks’ “Bringing Up Baby” (1938). Here, an apparently distracted but impeccably dressed Katharine Hepburn messes around with a baby leopard and a secondary and bland Cary Grant. But although the two girls in the painting have a cartoonish face that could relegate them to the role of women in the fifties, they step closer to the femme fatale than to the pretty girls with angelical faces who characterised the films from that time.

It is known that red can act as a tool in melodrama. Going back to Almódovar, he would employ primary warm colours in his scenography to emphasize the dramatic situations. But what can be said about yellow? Comic strips use yellow as a primary colour and it is easy to combine with red and blue. Roy Lichtenstein used it in the work Yellow Stroke in 1966, which parodied the broad brushwork of Abstract Expressionism. It is also employed in many of his works as a background, like in the case of Head (1962) or Kiss V (1964). In Criminal Stickup, yellow makes the scene neutral, as if a spotlight had been placed deliberately in front of the two girls, making their dresses and their shadows more visible and more shinning, and emphasizing this irresistible moment of explosion.

The yellow background also makes the work deliberately flat. But its flatness is as expressive as it can be, turning the concept of flatness into something extremely dynamic. There is no specific scenario that could contextualise the two women. There is no connection with reality. Even the shades are not hidden, they are clearly marked with a black spot that seems to be saying,“This is how a shadow is supposed to work,” and it does. The dresses of the two women are similar, colourful and with specific details such as an elbow patch or the fishnet stockings that somehow match with the background, with their hair, their bags and the overall scene. The painting denotes a certain interest in fashion, but it is merely formal, a series of patterns in order to match the required palette. Those irresistible ornaments that tackle the whole painting are an exercise of detail; they go beyond any specific style or decade classification. It rememorizes what Almodóvar used to say when asked about a possible contradiction between his liberated women and their obsession with the clothes they used: “A woman must be free, even at the moment she wants to choose her outfit.”

In this painting, as in Kruglyanskaya’s entire oeuvre, there are no men at all. And if there are, they are in the periphery, just a shadow. Ella’s men appear always as something like a statue or a contour, flat, depicted with a single colour, which exacerbates the complexity of the female characters. Here we distinguish a third character hidden in the back of the girls, appearing as a black shade over the yellow background. His silhouette follows the woman’s, bent on the side and easily identified with the depiction of the criminal in detective comic stories such as Dick Tracy. The hat, the trench coat and the gun work as the absurd and comic representation of the male figure that is doing a double-sided joke gesture. The painting is a play with representation. What is it that we are seeing? Is it a man or a shadow, a pistol or a penis? There is a beautiful period in Magritte’s oeuvre,“La Periode Vache” in which he revolts against the surrealist canon and decides to create freer and less elitist works, defending his Belgian origins against the French. His strokes are harsher; leaning towards impressionism even though the absurd and conceptual take on the works is still present. There is a rupture of the categorical borders between high and low culture, the parody, and the absence of the so-called “big narratives” or historicism. L’Ellipse (The Ellipsis) (1948) depicts a green-faced cartoonish character with a shotgun growing from his nose. Criminal Stickup in Yellow has something of this surrealist joke that implies sexual desire, but the man becomes totally overshadowed by the two women.

The women, the yellow and the criminal, in this precise order, this distinctive universe of femininity, colour and humour will appear in all Kruglyanskaya’s paintings, and always with exuberance. Here an exuberance of colour, size and expression that attracts you slowly, first by its energy and then when each of its details are revealed. But there is a last point about Kruglyanskaya’s work in where her strength and originality reside, and that is its timelessness. The references used in this text travel around the twentieth century freely, from the post-dictatorial Spain to the American fifties and from Surrealism to Pop Art. But the work is utterly contemporary. And that is what makes it so unique in the language of painting, where everything can easily fall into the imitation and the pastiche. There are no canons or style to follow; a feminine nervous breakdown is enough to start the episode.