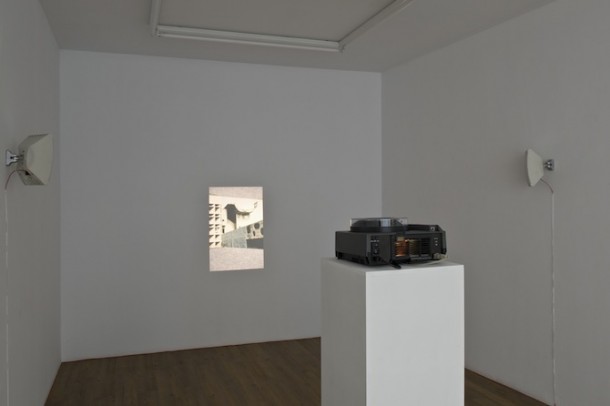 Tris Vonna-Michell: the career of a storyteller

I first met Tris Vonna-Michell in 2006. It was on one of the trips we made during the Masters in curating. We were going to Berlin, but had the good fortune of passing through the Städelschule in Frankfurt during theRundgang, the moment in the year when all the students exhibit their work in the school’s studios. To a group of more or less 15 girls, recently installed in demanding London, on a course that instilled competitiveness and professionalism, the famous school of fine art in Frankfurt seemed like an oasis. The students went by bicycle, cooked and ate together, and above all there was a very special and direct relation with the professors, all well known artists, amongst whom were Simon Starling, Douglas Gordon, Tobias Rehberger and Judith Hopf.

Tris Vonna Michell –if my memory doesn’t fail me- was in the conceptualism class given by Simon Starling, an artist I admire. He was presented to us in the canteen. I remember he was a boy who spoke English very fast and with a strong, Northern accent. I didn’t understand half of what he said but intuitively I found him interesting. He threw out one idea after another, just like in his performances, and there was something captivating about the rhythm of his voice and, thanks to my basic English, something abstract. I remember he mentioned that one of his references was a certain W.G. Sebald. I had just read Austerlitz and this served as a clue for me to understand the relation that could exist in his work between text and image, not as a direct illustration of what is said so much as a transversal support to the story. It was fantastic that an artist managed not to mention Debord or Rancière during the whole conversation.

That night Vonna-Michell made a performance in which, in a hypnotic manner, he explained an extremely complex tale, that jumped from character to character, from Paris to Berlin in a complicated story of detectives during the Cold War, to later encounter Chopin and other characters, all to the specific rhythm of a slide projector. It seemed more like a literary event, with a captivating voice, than the exhibitions we had seen up until then. It’s curious how now it has become something fairly common, repeated ad nauseam by sagas of young artist storytellers. We talked about the inconveniences or advantages of showing his performances in a non-English speaking environment, about whether it was essential to be able to understand the story or not, and how one could do a simultaneous translation and if it would make sense.

The next time I saw his was work was a year later in a large individual show that he did in Witte de With in Rotterdam. Really moved, I wrote a text for the Cultura/s supplement of La Vanguardia in August 2007. I mentioned his relation to Kurt Schwitters’ Ursonate above all because I still didn’t understand him and I was reminded of the nonsensical, sound poems, characterised by a rapid and abstract use of language. I also commented on how amusing it was that a thin, white, young man would dress in a baseball hat, and an XXL jersey, but that was before hipsters existed en masse.

In December 2013 his work is being exhibited for the first time in Barcelona, within the exhibition cycle The Story Behind at Nogueras Blanchard. His stories aren’t so much “behind” as “amidst” an amalgam of references and syncopated images. The work A Watermark: Capitol Complex (2013) is made up of a projection of slides that show a collage of images of the city of Chandigarh, built by Le Corbusier in India, and other more abstract images. The slides are synchronised with an audio of the artist’s voice. But I’m not going to start talking again here about the work of Tris Vonna-Michell.

What’s more there is little left to say, after all that Hans Ulrich Obrist and Massimiliano Gioni have already written about him in magazines across the world; the speed of his language, the relation between reality and fiction, the repetition and the memory. Perhaps the most interesting comment, from the mouth of Elena Filipovic, was about his relation to the oral tradition of storytellers. While we can’t currently count on his hypnotic presence we do have his voice, so I recommend you pass by and listen to it.

Curated by Direlia Lazo, from the series The Story Behind.