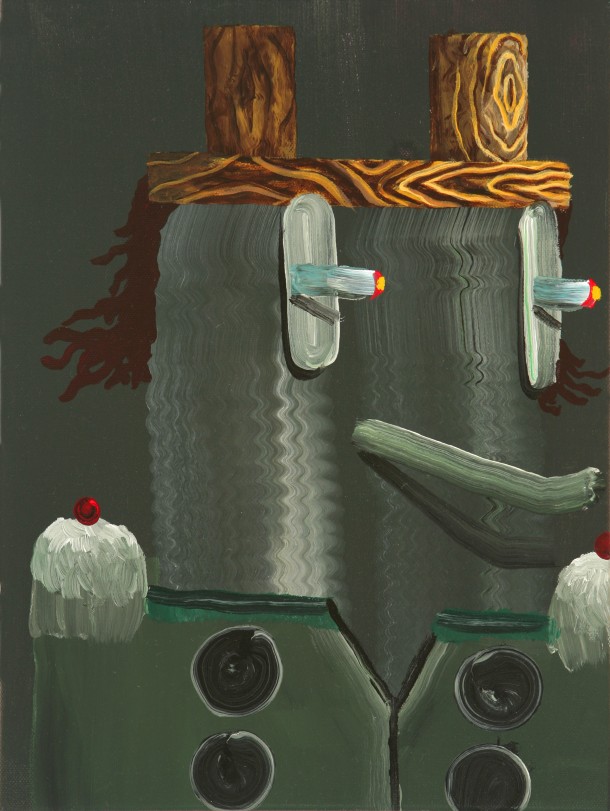 The work of Gorka Mohamed is not easy to fit in any particular time or context, but if it could, it would be somewhere between Goya´s Doña Josefa and Felix the Cat. Still lifes, amorphous-forms, serious cartoons or organic geometries. These descriptions move around the artificial world of painting, that extravagant and enigmatic world in which each painting suggests lots of themes, but they always remain ambiguous.

Each of the compositions that constitute the exhibition’s painting is situated in front of a flat horizon, without landscape, like the theatrical setting of a play by Brecht. That background tinges the figures with artificiality as if the hand of a ventriloquist could be the only force able to move them. On this ideal and oneiric scenery everything is possible. Each of the portraits is silent but has an infinite power of suggestion. In this silence we find the painter, that romantic artist, ridiculous and decadent, frivolous and aristocratic. But, who isn´t? Gorka Mohamed laughs at himself, at the role of the artist as transformer of a society of the spectacle in which you are not allowed to do anything, because, like in theatre, nothing really exists. The only way to act is from the spectacle itself, from the pop icons, turning them sad and defenseless, distorting them, using a dark palette that distances them from the stridency of mass culture. Against all arrogance of the artistic scene, of that Debordian hiperreality that swallows everything, the works of Gorka Mohamed are modest; they represent the contemporary individual smaller, surrounded by an aggressive and superficial environment in which any creation effort is in vain. Not even the Old Masters are free from becoming postcards.

Mohamed pays a certain tribute to old techniques and pictorial genres, especially to the Spanish Baroque, a moment in time characterized by the artist as “attractive for what it has of rude and deep, austere and strangely hallucinated”. It is this perfection and stylistic subtlety that Mohamed aims to represent through contemporary techniques. Composing through different layers and references, through free association of images and a clear bi-dimensional character. Travelling in time we can think of the 30´s and 40´s. René Magritte went through his Période Vache, he moved away from surrealism with a dirtier, faster and aggressive style, inspired by popular elements like cartoons and comical representations. We can also think about the polymorphous perversity used by the surrealists as well as by the pioneers of animation like Max Fleischer, in which each figure moves at the rhythm and swing of Cab Calloway.

Civil guards, Ionic columns, olives, cakes, disturbing eyes. In front of these opaque figures and objects, the single textual and objective clue we have is the title, a disturbing and many times absurd sentence that refer us to surrealist writing, in which title and representation have an arbitrary and whimsical relationship, apart from being a wink to Ceci n’est pas une pipe and the absurd belief of trusting what we see.

There are many humoristic levels that overlap in each of his works: the situation trick of the classic silent films; and a more pessimistic one that uses the more subtle ways such as allusion, the absurd and the satire. From the Baroque dramas to the anxiety of Beckett and Artaud, we recognize in the work of Gorka Mohamed that feeling of laughing to keep from crying, the generalized anxiety about the vulnerability of the modern individual.

Gorka Mohamed (Santander, 1978) lives and works in London. He studied Painting at Goldsmiths, University of London and at the Escuela Massana of Barcelona. Among his last exhibitions: Tautologies Galeria b’ONE (Seoul, Korea, 2010), Toon Toon, Galería Siboney (Santander, 2010), Ventriloquist, Timothy Taylor Gallery (London, 2009) and Planes Futuros (curated by Lorena and María del Corral) at Sala Baluarte (Pamplona, 2007). He has been recently selected for the Creekside Open Award (London) by the artist Dexter Dalwood.